The benefits of smart ear tags for calves 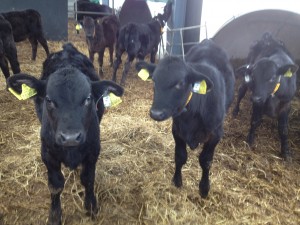 Just before Christmas we had the excellent Shropshire Farm Vets from just outside Shrewsbury visit our Select Livestock Farm in Pulverbatch to trial some smart ear tags for calves called Fever Tags.

The purpose of Fever Tags is to flag up evidence of respiratory disease up to 72 hours before the calf displays the symptoms. The idea is that If you can get on top of disease quickly, you can reduce mortality. The tag learns the typical temperature activity of the animal and only sounds the alarm if the temperature remains high over a six-hour period.

Once a calf has had a high temp for six hours, a light flashes on the tag to alert the farmer. The flashing light continues for six hours, after which point the device reverts to monitoring the temperature every 15 minutes.

The smart ear tags for calves were a bit fiddly to fit at first but we soon got used to putting them in. It is then a waiting game to see if the tags flash red. We were torn between wanting to see if they worked by flashing red, but of course if they flashed that meant there was potentially an illness problem!

We used the Fever Tags in calves that were also on our Holm and Laue automatic calf feeder, which tells which calves have and haven’t been in to feed. In theory, with the double check of monitoring feeding patterns on the feeder and having the warning signs of high temperatures, our mortality rates should have been low. Six or seven weeks later, all the calves are now weaned off their milk and we are happy to report that we didn’t lose a single calf.

So did the Fever Tags work? I would say a qualified yes. We did get plenty of flashing tags, and when that happened we invariably jabbed the relevant calf. Indeed, there was one evening when most of the pen was flashing – it looked like a disco! After a while, we learned to use more discretion with regard to the usage of animal medicine, and there was one calf that flashed many times but whose growth rate was as good as those whose tags were not flashing.

So for me the jury is out. Smart ear tags for calves are a great idea but they do cost money and may prompt a farmer to use more medicine than they would ordinarily use.

For more information on Select Livestock, our calf rearing or store growing contracts, please contact me, Dan Morris, on 07902408400 or dan@selectlivestock.co.uk